Taxi
Taxi's i found to be a little less trustworthy, I've only used them a hand full of times. I generally never use taxi's as they are a bit expensive, and i like walking around cities and using public transport. Bangkok's taxis are metered. The initial pickup fee is 35THB (More from Airport) But some drivers need to be reminded to turn on the meter, as they hope to rip you off, others might try telling you the price before you get there. (Not necessarily a bad thing if you know the correct price for your trip) Others might take you on a loop of the city's highways bringing you on a 30km drive instead of a 4km trip. Another scam to watch out for is a fast running meter, with your fare increasing much quicker than normal. Get the taxi number and report them. They are not all bad, but just be aware! Most of these drivers are found waiting all day outside hotels or big attractions, walk a little further and hail a cab. 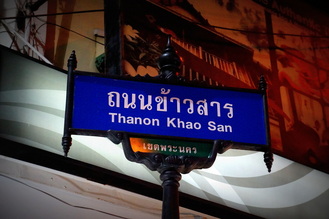 The infamous backpacker fun loving ghetto, this small street is located about a ten minute walk from the Grand Palace. The street, and the small surrounding area is crammed with, bars, neon signs, fast food, hostels, tourist agencies, internet cafes, cheap knock off clothes, fake ID's, tourist tat touting hawkers, with the street sandwiched at both ends by hawking taxi and tuk tuk drivers. Some backpackers will enter a Khao San twilight zone, entering one day and emerging ten days later, after a string of blurred Chang clinking nights. It is a self contained backpacker bubble, plenty of cheap accommodation, and many buses and mini vans leave from here for onward travel. It is loud, in your face, good for a night out but dont enter the twilight zone and miss out on where you really are. Although there’s no BTS Skytrain or MRT Subway connection, Khao San is right in the centre of Old Bangkok.

There is a strict dress code for visiting the Grand Palace & The Temple of the Emerald Buddha, Thailand's most sacred site. Visitors must be properly dressed before being allowed entry to the temple. Men must wear long pants and shirts with sleeves -- no tank tops. If you're wearing sandals or flip-flops you must wear socks (so no bare feet.) Women must be similarly modestly dressed. No see-through clothes, bare shoulders, etc. If you show up at the front gate improperly dressed, there is a booth near the entry that can provide clothes to cover you up properly. If you try and stroll in, guards with microphones will quickly get your attention and tell you how to correct yourself. There are plenty of opportunist traders selling clothes outside if you are caught out and a place where you can rent some clothes just inside.
Operating Hours 08.30 - 15.30
Admission 500 Baht 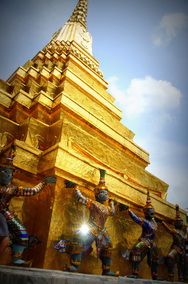 Wat Phra Kaew
Temple of the Emerald Buddha. We pretty much discovered the Emerald Buddha here in Bangkok and as we traveled on around Thailand, Myanmar, Laos, Cambodia etc this small little Jade Buddha's hugely revered significance soaked in. He has traveled more than many. Legend says he originated in India, was there for a few hundred years, then had to be moved to Sri Lanka to escape war. Then the Burmese wanted a lend of him to spread Buddhism through their country, however he got lost on the way and ended up in Cambodia..In 1432 the Thai's captured Angkor Wat, found the Emerald Buddha, brought him to Ayutthaya, then into Laos and finally hid him in Chiang Rai. Two years later in 1434 the temple in Chiang Rai (Wat Phra Kaew also) was struck by lightening and some monks found the Emerald Buddha, after his rediscovery, he moved around northern Thailand, to Chiang Mai, then to Luang Prabang., and the onto Vientiane. Where after a failed uprising the Thai's Captured Vientiane took the Emerald Buddha and in 1784 the emerald Buddha was moved to its current home, Wat Phra Kaew! phew he gets around!

Great views over temples and the sprawling city of Bangkok, from the top of Wat Saket 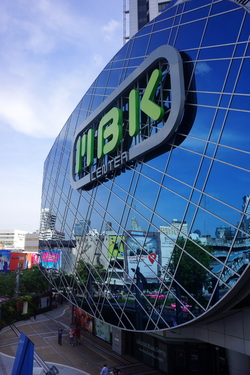 If there's two things thing Bangkok does well, its temples and shopping. There are several large scale shopping malls to splurge your hard earned money.
MBK- If you are after the latest in phones, tablets and all there accessories its hard to beat MBK center. Spread over seven floors, each floor being for different things, one for clothes, one for furniture, one for phones etc and the top being a cinema and arcade machines. Mbk is something like and indoor Chatuchak market, a place for haggling and bargains.
Siam Center - full of trendy clothes and boutique shops, good food to be found on the 4th floor, nice mix of Western and Asian food court thing.
Siam Paragon Mall- highend fashion, good place to get a new Versace sock or obscenely priced shoe
Central World- Another Megamall will a huge amount of shops. The Cinema on the top floor is great, theres bean bags, reclining seats and huge screens. There is a large amount of cheap restaurants here too with food from, all over the world. Another cool thing is exploring the large supermarket beside the cinema. Often you will pass strange and weird fruit and vegetables on the street and have no idea what they are. Having a wander around the supermarket you get to see these new and interesting things with English names so you can finally know what the hell things are!
All located in and around Siam BTS stop with most closing at 10pm

Chatuchak Weekend Market is one of the world's largest weekend markets with something like 15,000 booths selling goods from every part of Thailand. There definitely are bargains to be had here if you are after some clothes, books or souvenirs. Plenty of cheap Chang T-shirts to expand your backpacker wardrobe. The market is popular with Thais and tourists alike. I'm into eating stuff and finding new and interesting eats, and there is always something something new and tasty here. There's lots of street food vendors both inside and out cooking up tasty treats. Open weekends 6am-6pm 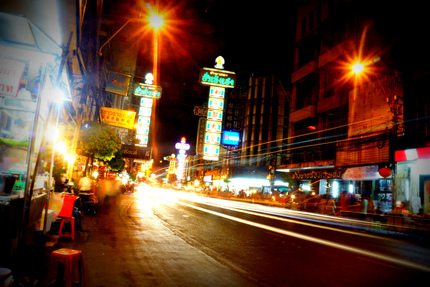 A popular tourist attraction in Bangkok, especially for foodies. The main Yaowarat Road is lined with all sorts of street vendors, with all the side streets buzzing and sizzling with delicious food action. Best come here with a good appetite and an open mouth. Popular throughout the day, but Chinatown really shines at night, plus darkness hides the satay stains and noodle soup slurps that you fed your clothes. A once notorious area home to Opium dens, brothels and gambling houses, today it is the great food, souvenirs, gold and a sense of adventure that lure the tourists to this area. If you are in Bangkok during Chinese New Year, make sure you pop down here. The whole street is closed to traffic with huge celebrations, performances and general awesomeness.

Bangkok being intoxicatingly addictive as it is, there are some pretty spectacular sights that lie just outside the city, just a short bus hop away!

The ancient capitol of Thailand, steeped in history and surrounded by vast and beautiful temple ruins. An easy day trip from Bangkok, the bus costs around 60BT from the northern bus terminal, when you arrive i recommend to take a tuk tuk around all the temples, should cost around 200bt an Hr for the Tuk Tuk for two people. Its alot more comfortable than cycling in the 38 degree humidity, lost. You will be sweating enough walking around the Temples. Whenever you are finished, you will be dropped back to the bus stop. Expect to spend at around three hours seeing the most famous and must see sights, but you are free to decide on when and where you wanna go. There are loads of buses and minivans constantly going to and from Bangkok, so no need to rush around. 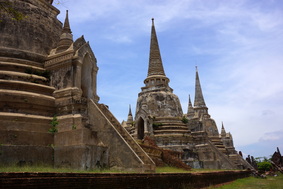 Ayutthaya was founded in the mid 1300's, due to its ideal trading position between its neighbouring countries, China, India and Malaysia.  It quickly grew in importance and became one of the worlds biggest trading capitols. Traders from all over the world would set sail to here, reporting back abd  speaking of the dazzling golden pranged grandeur of this one hugely important city. However in 1767 the Burmese laid siege to Ayutthaya burning most of it to the ground