Vang Vien
A Riverside town in Laos, and it probably has the biggest night life scene in Laos too. The place is infamously popular for its Tubing, which involves you floating down the river, past various drinking holes, sailing in for a few beer Lao then bob off down the river for a few more, & more again. There are bars showing non stop tv reruns, and offer a chance to meet other travellers. There is not much around other than the amazing mountain scenery and rock formations. If getting drunk and partying is not your scene maybe not the place for you..

The former capitol city and the first UNESCO listed site in Laos. There are some beautiful temples,waterfalls, caves, night markets & great eats for foodies. If you happen to be here for the South East Asian New Year or Water Festival as it has become know to the western world, the place goes nuts. A four day long water fight breaks out soaking anybody and anything, there is no holding back and everyone is a target. Cars and Tuk Tuks whizz by soaking people, as shop owners spray hoses back, alongside kids with water guns and monks with buckets. You will not be dry long.
The town is small and has not been hit by mass tourism, so still retains its charm. There are many places for cheap eats along the banks of the Mekong.
Check out
Getting to Luang Prabang usually involves coming from Thailand by a 2 day boat ride down the Mekong or by quicker speed boat, Or minivan from Either Vientiane or Vang Vien. 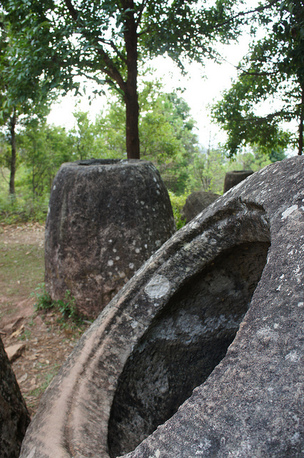 Home to the Plain Of Jars.
Mysterious large pieces of rock carved into huge pots scattered over a massive area. Still to this day, people are unsure as to there significance, but most think thery are likely from burial practices, cremations, similar to an Urn, associated to royalty
(wiki)
There are various other sights to see around the area, the
impressive overgrown temple stupa Wat Pia Wat, andthe magnificent ruin of Wat Si Phum.
Check out the work being done by MAG, (mines advisory group) they have a visitors center along the main street which definitely worth a look.
All around Phonsavan you will see bits of bombs, and other military gear, often used as flower pots, BBQs, bomb casings used as stilts on village houses. UXBs (unexploded bombs) still claim this lives of people here, particularly farmers and also poor people trying to retrieve the bomb's
valuable metal from the earth so sell.
Be careful  when out and about exploring and stay within the cleared areas, which are well marked. This is the case around the plain of jars, and some rural villages. Some of the huge bomb craters just outside the town are still littered with cluster bombs. If you are heading on to Hanoi from here, the bus pulls in around 2am ish, costs around $30 taking about 20hrs to get there. If they ask you to sleep under the chairs, in the luggage rack, obviously say no and ask wheres your seat?!! This happens often!