Its approaching that wet and wild time of year again..Thats right folks Songkran time!! also known as Pi Mai in Laos, Thingyan in Myanmar and Chaul Chnam Thmey in Cambodia, its the South East Asian New Year.. or to all westerners as
The Water Festival!!
Meaning behind the splashes

A monk procession in Luang Prabang, Laos. The monks are getting sprinkled with water and scented water as they make their way to the Temple
There is of course a deeper, more meaningful reason behind all the crazy water splashing antics of these otherwise calm friendly people.
An important date in the Buddhist calender, the water festival is part of a cleansing ritual that is celebrated during the South East Asian new year.The water is seen as being a symbol of purity and pouring water on another is a blessing, a sign of wishing good health, well being and respect.
Houses are cleaned and tidied up, people put on new clothes and Buddha statues are washed with water in an act called 'Bathing the Buddha'. As are the monks who will parade down the street getting  respectively sprinkled by hoards of locals. In the temples, many offerings of fruit and flowers are brought.
After the cultural offerings are met people literally flood back to the streets ( pun intended :P) an extreme city halting water fight free for all splashes into action. 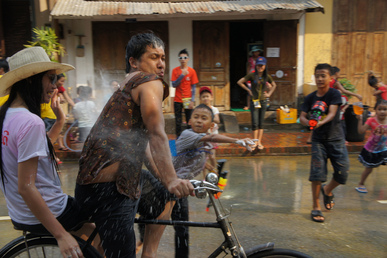 Water is thrown, poured, squirted, sprayed from any available tub, pots, pans, garden hoses, water pistols, buckets cups,
Water can come from any direction..and from any one...at anyone!
From moving cars and tuk tuks, shop fronts, peoples windows, little kids hiding in buckets to cheeky monks hiding behind the Temple walls flinging water over at passers-by. If you are looking a shade dry you are an instant target for water splashing, talcom powder tossing, paint slapping hoards.. and you deserve to be! I emerged a multicolored, powder encrusted soaking mess each day.
It is all good friendly fun. I ruined a good camera and clothes and it was awesome doing so..
Most proprietors have large buckets, taps and hoses freely available to load up your water weapon of choice so you can continue your rampage.. not to mention some celebratory rice wines and snacks along the way with the locals.
The festival is celebrated in every corner of Laos and also throughout neighboring Thailand. Just after the celebrations i traveled past some small remote hut villages, far from Luang Prabang passing small kids clung to the roadside splashing passing cars. A soaking celebration on epic proportions. Most people will flock to either Chiang Mai, Bangkok or Luang Prabang to join in the craziness. I thoroughly recommend going during this time, amazing memories and i will be back!!